On Wednesday (8/27, which also happened to be my birthday), I got up and finished getting my gear together to head up north to Copper Harbor for the Copper Harbor Trails Festival. Since Subaru still doesn't have my car fixed, I had decided to use up the last of my free rental days from when I travelled a lot for work, and rented a minivan for the trip. I rode my Salsa Spearfish to the airport and picked it up. It didn’t take too long to load my stuff into the van, especially since it was just me going up this year. After a quick stop at the Grand Rapids Bicycle Company (Thanks!) to pick up a derailleur cable for my Horsethief, I was on my way. 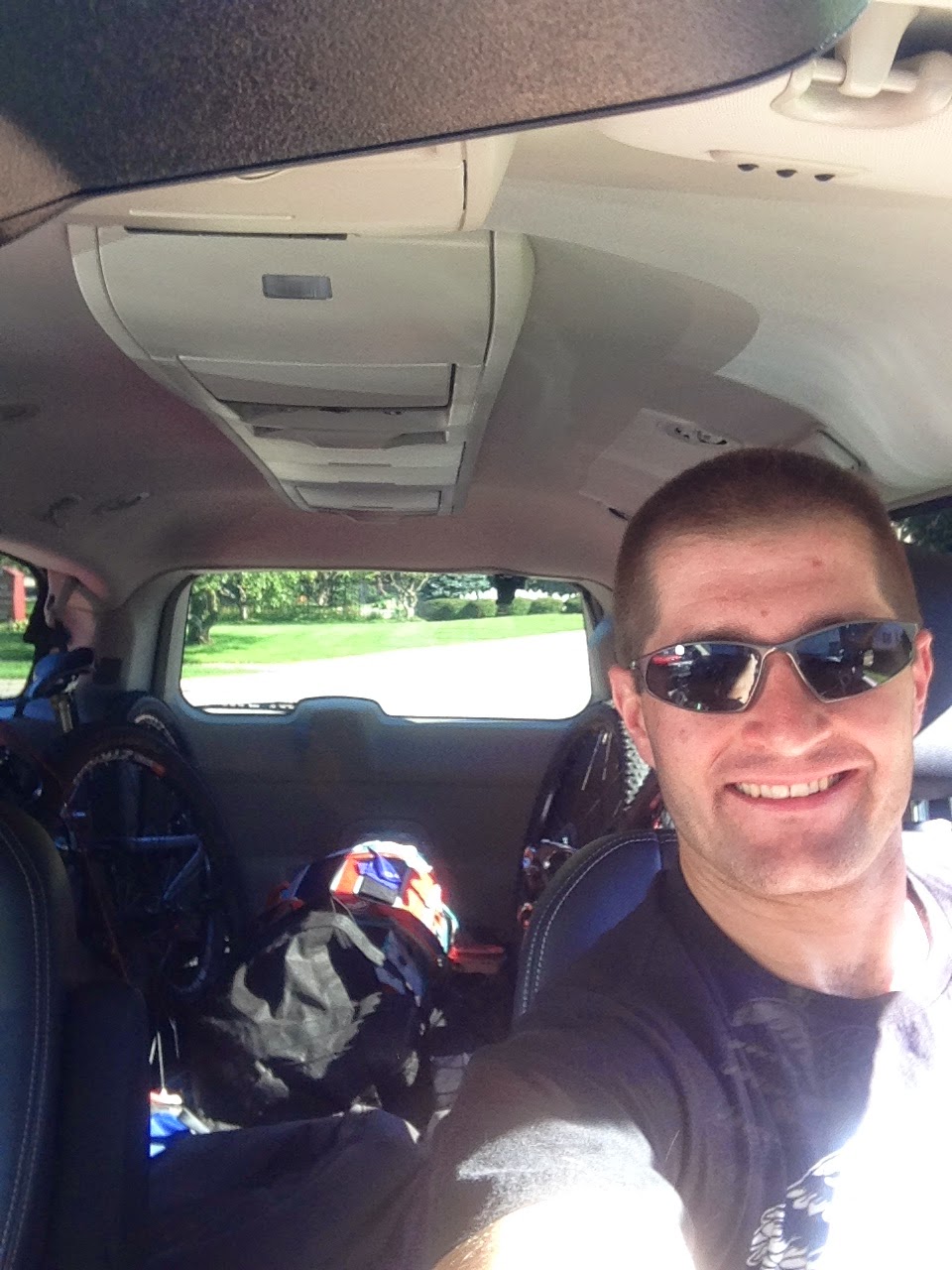 Loaded up and ready to go!

I stopped at the Subaru dealer in Marquette to check on the progress being made on my broken car (none), and get the rest of my stuff out of it. All that fit fine in the van too! Here are some sad pictures of what my car looks like right now. Still no word when I’m writing this as to when it might be fixed. 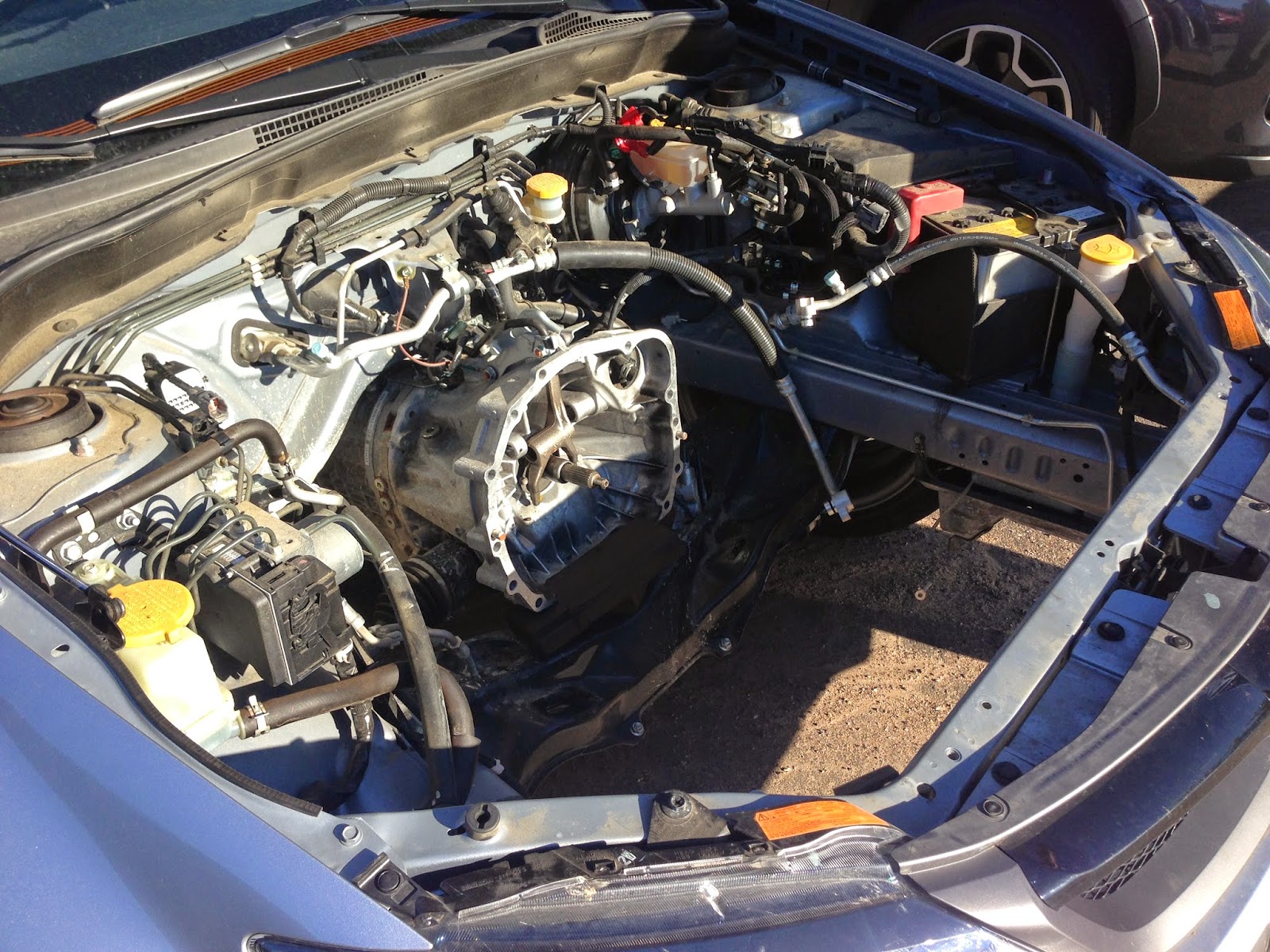 After looking at my car I got back on the road and headed for da Harbor. Unloaded my stuff at the cabin (Minnetonka), and grabbed some dinner and beer at the Mariner North. Ran into a few friends who had been out marking the race course and had a few beers with them.
On Thursday I got the Horsethief put together and headed out for a short ride, getting the setup dialed, new brakes bedded in, and checking out part of the Enduro course. Mainly I was just out having fun riding my bike. Here's a quick edit of my run down the Flow Trail.

After some lunch and grocery shopping, I went back out and hit a couple of the harder trails and find the lines I could ride on the Downtown Trail without hurting myself or losing too much time. I had walked a few sections of that trail before during Single Speed USA, but now that I had a proper bike I figured I should use it properly. Post ride I grabbed some dinner (Mariner again) and then had more than a few beers at Brickside Brewery, talking with some local friends. Ended up going to Ziks bar next door for a few more too, probably not the best idea, but I wasn't racing the next day and I was in Da Harbor…

I slept in quite late Friday and didn't get out on my bike until later in the day (weird how that happened). It was starting to act like it was going to rain, but luckily I was able to get out for a bit on my spearfish to ride part of the XC course.  After riding I relaxed for a bit, ate more food, it started raining, pretty mellow day. 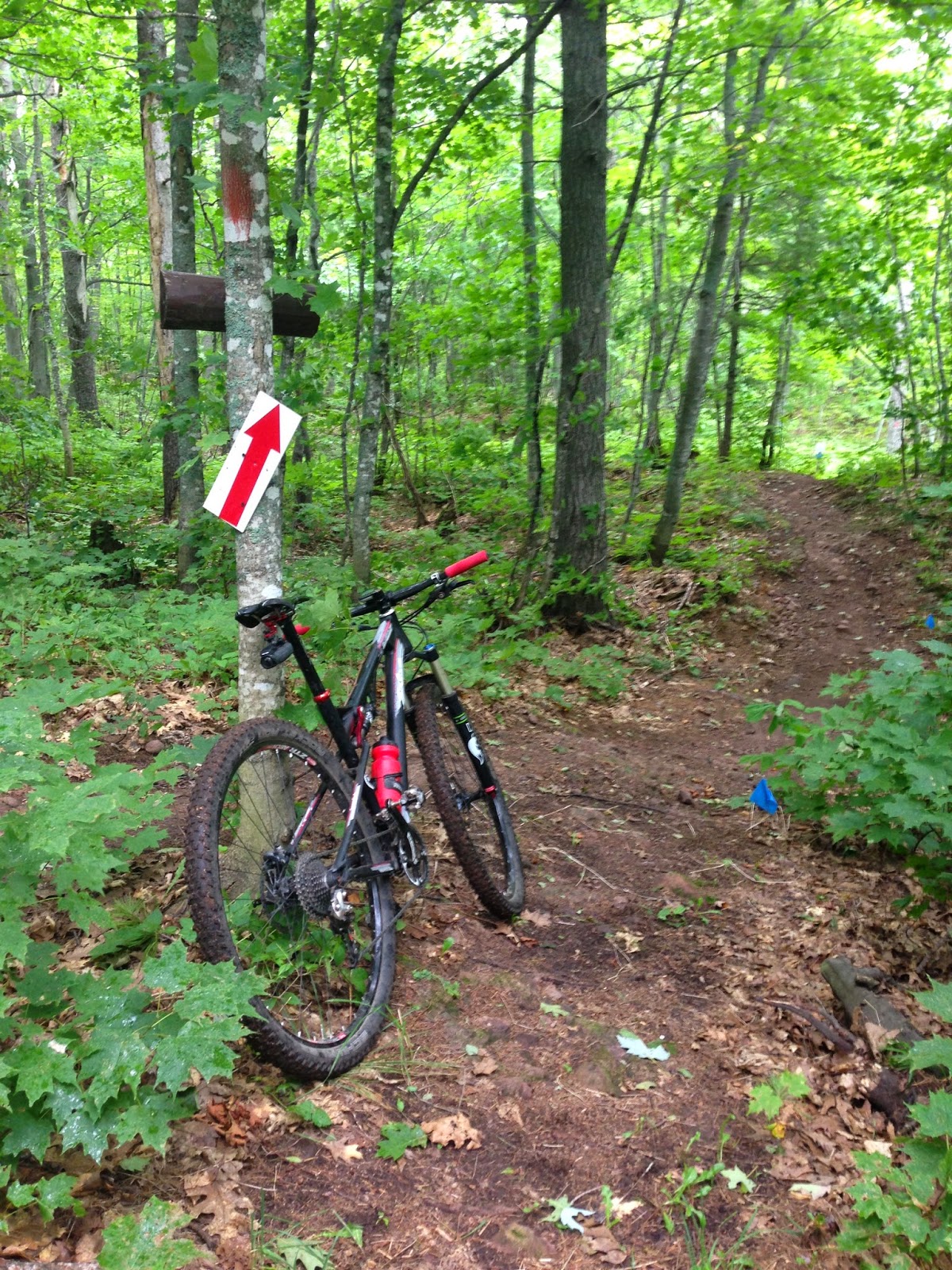 About to tackle the red trail on the Spearfish.

Saturday was the Enduro Race. I was doing the Long Course which meant 4 timed downhill sections (riding to the start of each). The 2 trails in the morning were only done in the Long race, Downtown and Red Trail. 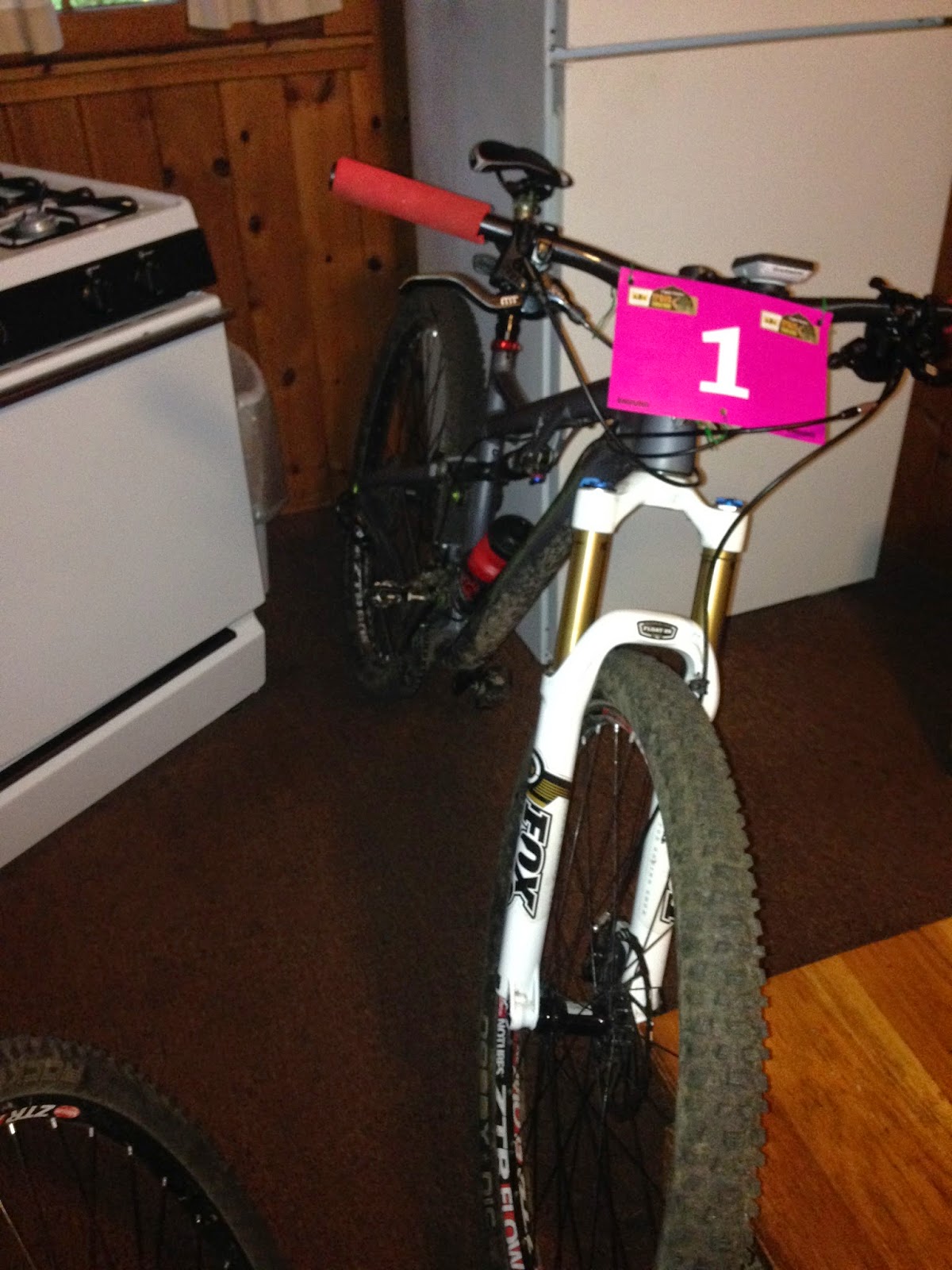 The Horsethief ready to race!

We started from just past the trail-head at 10. It was still pretty wet so I added a pair of baggies and a vest to my kit for the ride. Other than that I had a bottle of Lemonade CarboRocket which would easily get me through the morning. I was the 2nd rider to reach the start of Downtown, which I wanted to do first to get out of the way. The Horsethief did a great job soaking up the rock drops and I made it down in one piece. Lost a bit of time, finishing the run in 3:30.1, was the 8th fastest for the day. Then I made my way back to the top of what is probably my favorite trail in CH, The Red Trail. There was quite a big line at the start of racers still waiting to make their first run of the day and had to wait for about 20 min, which wasn't ideal. I still had a fairly good run, letting the bike do its thing and trying to put the power down where I could. I finished the Red trail with a time of 4:46.0, good enough for 2nd fastest, though we didn't know the times until Sunday due to a glitch in the timing (it happens).
I had plenty of extra time between the morning and afternoon sessions, so I washed my bike, took a shower, ate some lunch, and took a nap. The afternoon loop was done by those racing both the short and long courses. This sent us down a combination of Overflow-Flow-Daisy Dukes, and a portion of the Woopidy Doo trail for the 2nd run. Since the run down the flow was the longest and had the most pedaling of any of the 4 trails, I decided to head there first. This meant riding up Brockway Mountain Drive to the start, which is one of the hardest road climbs in MI. I spun fairly easy up the hill and was the 2nd racer to the start, behind last year’s XC race winner.  I hadn’t ridden the section of Overflow at the start, which is basically a jump trail to start the downhill. Definitely lost some time there, but once I was back on the Flow Trail, I put the hammer down and tried to make up some time. I ended up with the 3rd fastest time down this section with a time of 8:48.8. I then had to ride back up Brockway, and down On the Edge, to the start of the last section on part of the Woopidy Doo Trail. This was a nice short and fast section, and luckily I didn’t have to wait long at the top this time. I was able to hammer this one pretty fast, passing the guy who started 30s ahead of me and catching the 1min man right about the finish line. I ended up with the 3rd fastest time on that trail finishing it in 3:31.3. Though I didn’t find out times until the next day, this gave me a total time of 20:36.2. That was good enough for 2nd on the day, losing out the guy who won every round of the Lake Superior Gravity Series. I was very happy with that since it was my only Enduro of the year, and I don’t get to ride that bike or those trails very often. When the enduro was done, it was recovery time. I got cleaned up, had some Carbo Rocket Rehab (cappuccino), ate some food and hung out for the rest of the night. 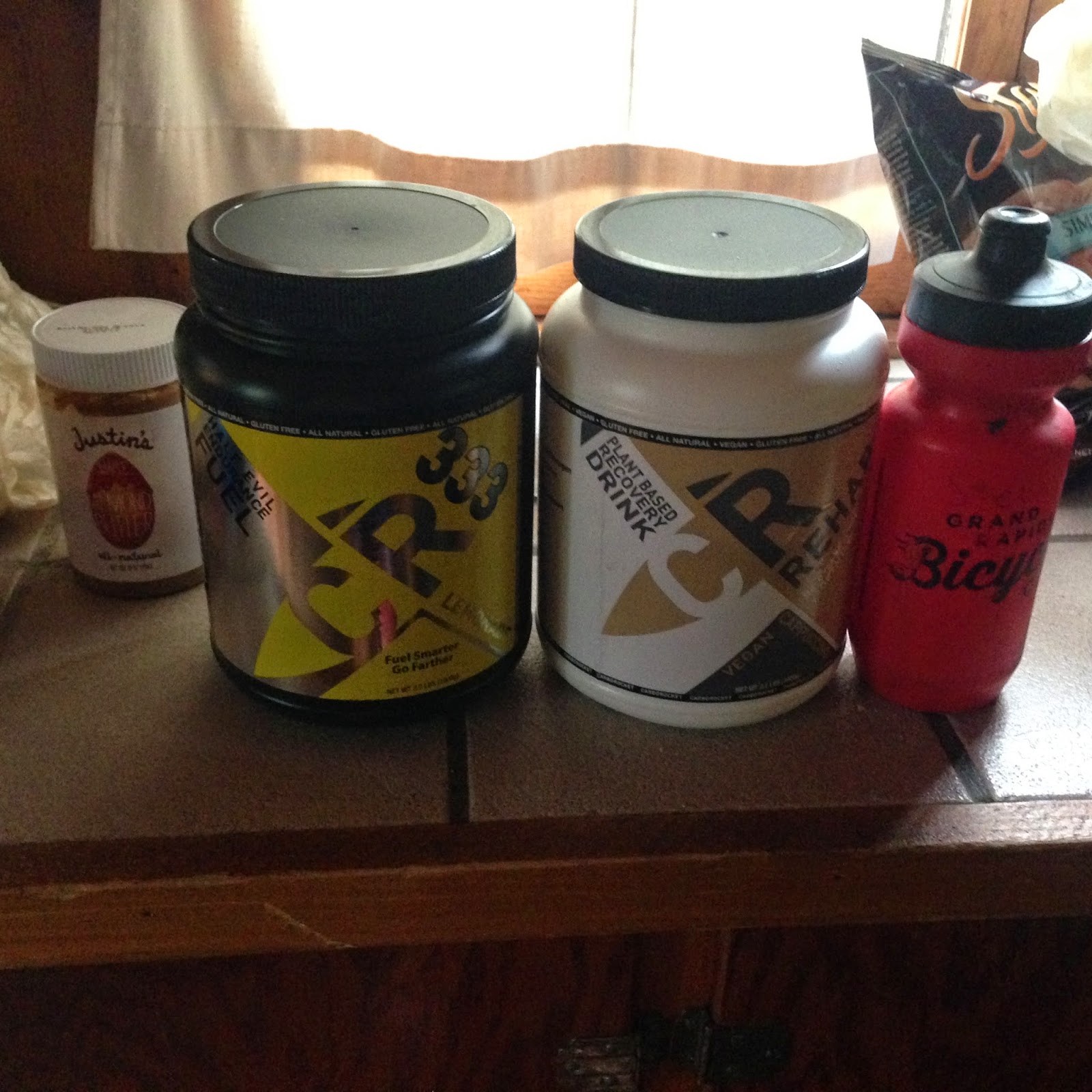 
Sunday was the main event of the weekend, the cross country race. This was the 21st year of the event. I’ve done 12 or 13 of them now and would highly recommend everyone do it at least once. This year there were about 300 racers across all categories, with 79 guys in the long race I did. The weather was great, and after a relaxing morning I watched the short race competitors take off at 1pm. Then finished getting my stuff ready and got dressed. This isn’t a super long race but it is hard, lots of climbing and technical, rocky descents. I decided to use my hydrapak with about 50oz of water and 4 scoops  of lemonade CarboRocket, took some shot blocks and a half bottle of plain water just in case. 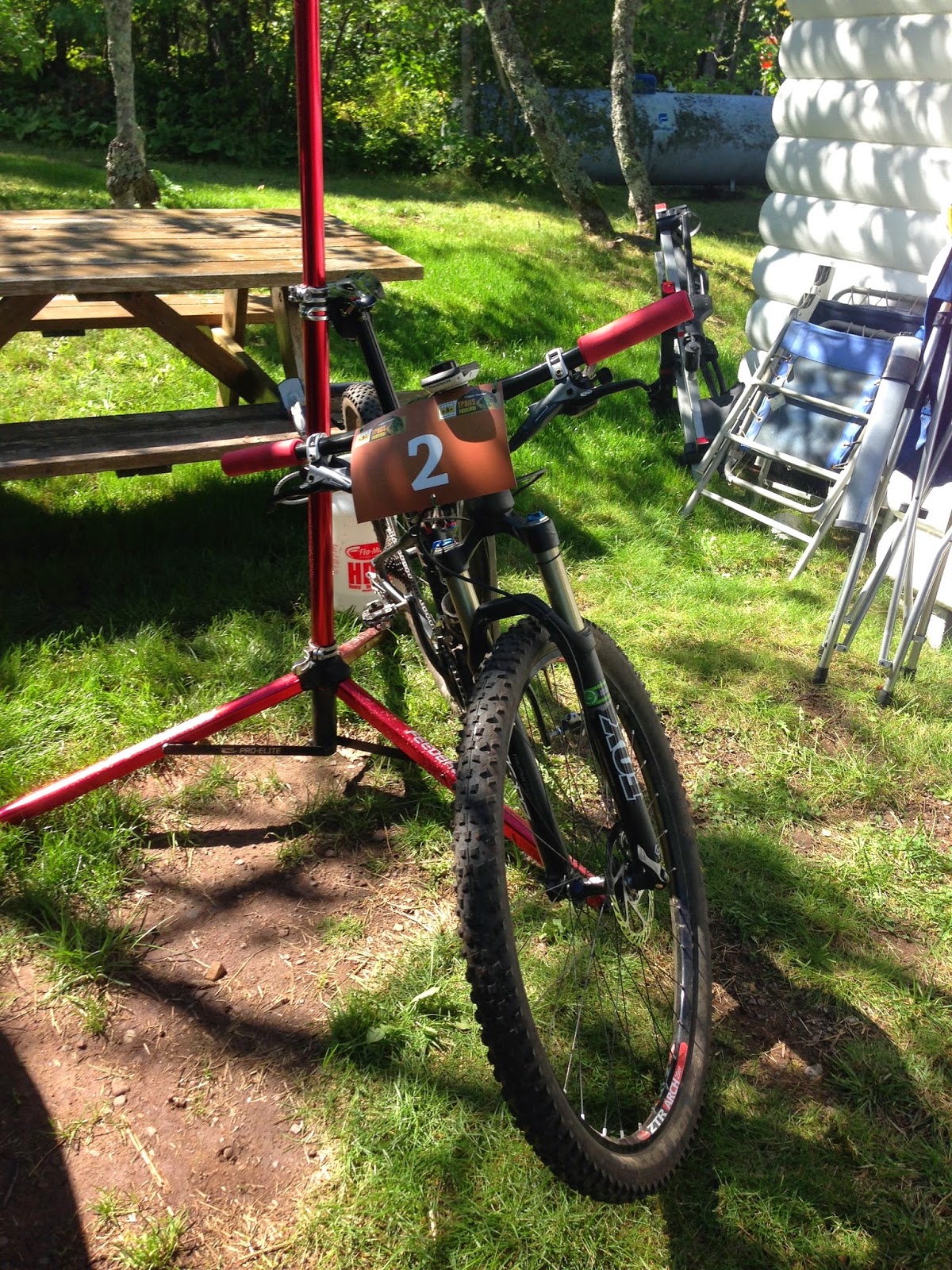 Another Race, another Salsa

The race starts out up Brockway Mountain Drive. I was in a decent position, still not a climber so it was all about limiting the damage. I went into the Flow trail probably around 20th position or so, unfortunately there’s no place to pass going down and it was the slowest I rode that trail all weekend. Coming out of there, I tried to work my way forward slowly, got stuck in another group for a bit but was still in an ok position. Once the second half of the race hit, I was able to get around that group, made a pretty good tempo from the end of Bullwinkle to the top of the Red trail. On Red I caught another group, passing where I could and waiting for people to burn up. 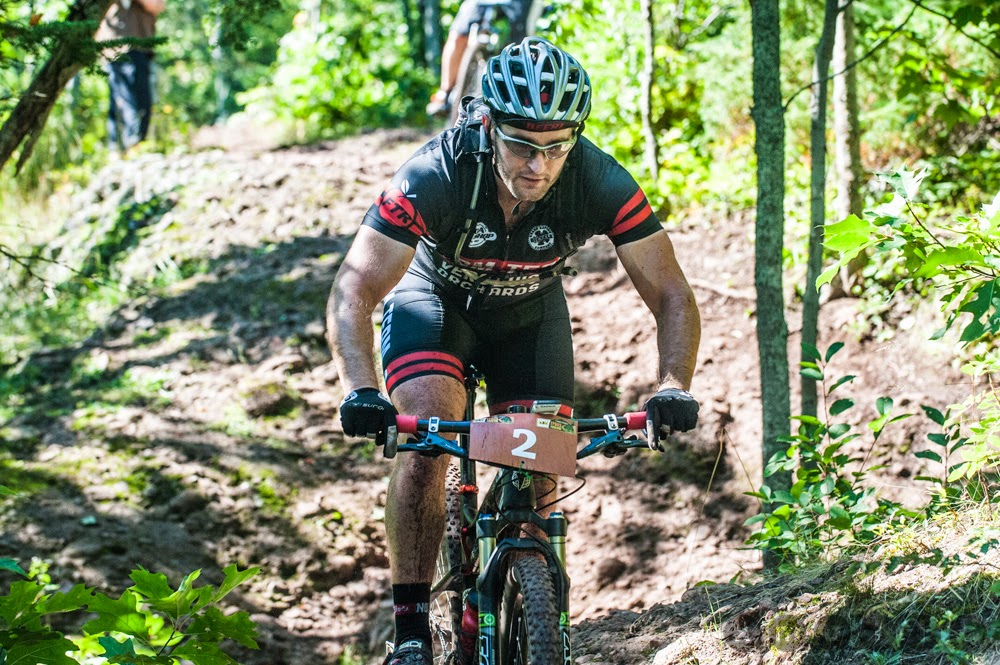 My legs were feeling pretty good going out for the second loop and I was catching and passing guys quite often. Apparently all these long rides on fatbikes and endurance races have helped that at bit ;). The second time down red I caught one more guy and knew had good legs for the finish, so I saved some energy and made sure I rode clean. He passed one of the racers from the short race more than a bit rudely on the final descent, and cut a small section of the trail to get to the road a bit sooner. This put me a bit behind, but at that point I HAD to catch him. So I went into a full aero tuck and hammered after him. I caught and passed him just before we swung into the 2 track field trail 1/4mi or so from the finish, then there was another guy right in front of him, so I kept going. My legs and lungs were screaming at that point, but I kept hammering through the finish line. I finished the race in 2:21:07, good enough for 10th overall on the day. I am definitely happy with that result for this year.
After the race was the usual massive party in the town park. The awards ceremonies with the best trophies of any race. Lots of Bell’s beer was flowing, food from the Fitz, live bluegrass, and general mayhem (and beer) until the wee hours. It’s always one of the highlights of the weekend.
Looking forward to being back next year and hopefully bringing more friends! 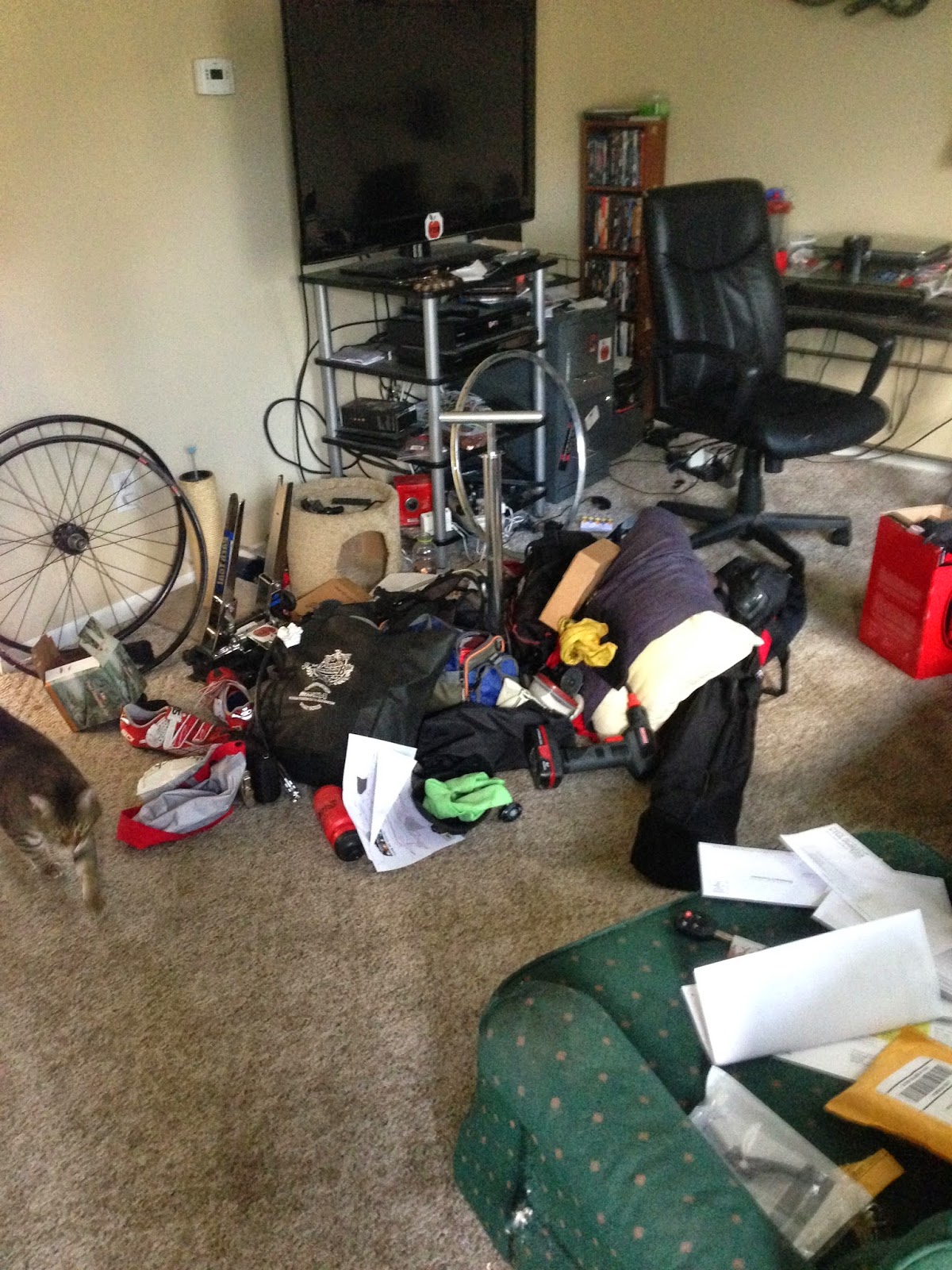 For event results, info on the trail in the area, etc visit the Copper Harbor Trails Website!
For awesome GPS and video trail maps of Copper Harbor visit Trail Genius.
More photos here, including some of me in the enduro, and on the podium.
Please, if you can donate to the Copper Harbor Trails Club, Currently a Silver Level IMBA Ride Center, shooting for Gold!
Thanks to Bell's Beer for sponsoring the event and trails!