This season the Farm Team was lucky enough to have 616 Bicycle Fabrications as a new sponsor. For me this was a pretty big deal.  How cool is it being able to spec out a bike that's going to have you're name on it? Pretty much the best thing ever.

The first bike the guys built for me was a travel ready 29er mountain bike. 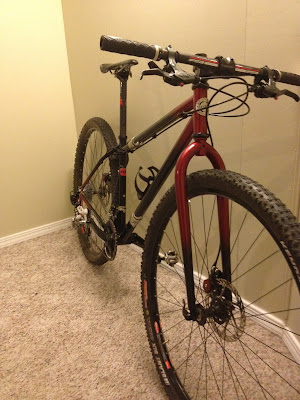 My job requires a lot of travel to exotic locations like Kansas, Arkansas, Iowa, etc. and the last few years have been pretty poor as far as racing goes given how little time I have been able to ride. I had it built as a 29er since my other mountain bikes were and I can use the same wheels (and components) on most of my bikes, giving me more flexibility in setup and options if I break bike parts (which never happens right?).  I also had the bike fit with sliding dropouts, which I primarily use to adjust the wheelbase and tire clearance depending on where i'm riding, but would also allow me to run the bike as a single speed in the future. The sliding dropouts to make the rear triangle a bit wider though, which makes the packing of the bike a bit tougher. So far I've ridden this bike in GR, Colorado, Arkansas, and Copper Harbor. I plan on taking it many more places.
So if you were wondering whether or not a travel bike is strong enough or capable for real riding the answer is YES! The frame has couplers from S&S Machine that allow me to break the frame down and fit the whole bike into a case that measures 26"x26"x10". This is the  size limit for most airlines before you get charged a lot extra (though some airlines like Frontier allow you to check a full size bike box as reg luggage). Most travel bikes are road bikes, so fitting a 29er MTB into the case has a few challenges, but it has worked excellently for me. I should be able to get a lot more riding in throughout the year with this bike. Here are a few pictures and descriptions of what the bike looks like going into the case, etc. 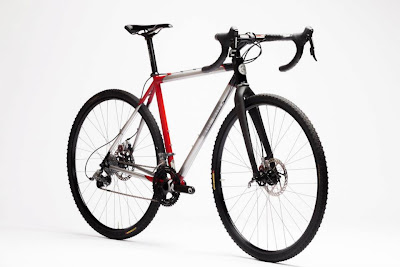 The second bike the guys built for me turned out to be a work of bike art. Also it is awesome. Earlier in the year I had done a bike fit on my mtb race bike at Ada Bike Shop. What we found there was that I have relatively long legs and a short torso, combined with the fact that I'm 5' 7" to begin with. Luckily we were able to get my mountain bike to fit me without too much of a problem. I had already known that my last cyclocross bike didn't fit my properly, and I was never completely comfortable on it.
For my new custom bike I took the knowledge and measurements gained from the bike fit, compared geometry from a few of the top end bikes out there, and created a drawing in autocad for my new bike.

I also wanted to use the latest in bike tech, so this frame has a BB30 bottom bracket, oversized HT, disc brakes, and the frame material: stainless steel. Stainless tubing happens to be about the same weight as titanium, is a bit cheaper, and builds a very stiff frame. In my opinion it looks better too. This bike has been awesome so far, the handling is great, it climbs great, etc. Just look at it, it even looks fast. Right now I have it spec'ed with a full Sram Force group, avid BB-7 brakes, FSA carbon bars and seatpost, and a set of my old mtb race wheels (another benefit to riding 29ers). Soon I'm hoping to build myself a new set of wheels with the new 616 mtb hubs and the new Stan's Ironcross rims. Also looking forward to the Sram Red disc group when that becomes available. This bike is gonna have a lot of miles put on it over the coming years, so here are a few pictures before I beat it up too bad. I should have this out at quite a few cross races this fall.

All that being said 616 Bicycle Fabrications make awesome bikes. Visit their website and their Facebook page for more bike pron and their contact info. Also see where my travel bike goes next by watching here on the Farm Team Racing Blog and on our Facebook page.

Thanks, now go ride your bike!
Steve
Posted by Steve at 8:03 AM