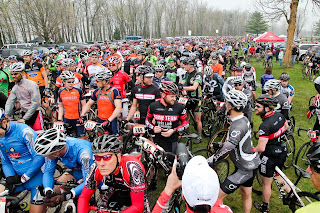 
It is finally that time again. Time to see where the last three months of training has gotten me. The answer, well it could have been better, could have been worse. The rather temperate winter has apparently allowed for a lot of people to get in early miles this year.


As in previous years the Barry Roubaix was the first test of the year. Oddly enough for me, the first race of the year is also my longest in both miles (62) and time, since I stick mostly to Cross country and cyclocross during the year.


Word was there were about 240 guys going for the full 62 mile distance, about double from last year. Lots of big talent from around the mid west in both the mountain and road scenes came out of hibernation to duke it out. The Farm Team sent 4 to the line to give 'er. Farmer, Spandex, D. Jansen, and me (Shawn D.) set out for some good old fashioned suffering.


The start was the normal fun of everyone trying to stay towards the front before the sandy Sager rd. two track. I entered the two track a lot further back than I would have liked. After exiting that section, then it was back to the gravel roads. I could see the split had happened. I could see the lead group just ahead, but I had pinned myself for the last mile through Sager to make up spots hoping to make it up before the selection....too late. Didn't have the gas to bridge and ended up in a chase group of about 25 with Farmer, Garth Prosser, Matt Craig, some dudes from RBS Trek, and a few others. We rolled for the next 45 miles with no real change. As we got down towards the end, I think we dropped a few out of the pack at the climbs on Yuklee rd. I think everyone was waiting for the new section of added 2 track at the end that came around mile 57 or so. I hadn't ridden it yet, but word was it was supper sandy and most likely it was going to be a get off and run type of deal.


When the group hit this section, all kinds of things happened. First off there was a lot of large puddles from the recent rains which caused a variety of reactions. You could tell who road a lot of mountain and cross and who stuck strictly to the road. I started moving through and around people to get out of the traffic jam. By this time Garth and 2 others had gotten off the front of the group. We hit the supper sandy, hike-a-bike section, took a look back and there was about three of us that had gotten a gap off the front of the group, but we were not organized and we were all running like hell through the sand trying to escape. When I hit the road there was Garth up the road about 150 meters and 2 others in between. I caught one guy that looked like he had red lined himself and was throwing in the towel and continued on after the next. About the top of the road climb, when I was about finished, I got caught by two other guys that had gotten off the front. We got organized and picked up the guy between Garth and us on the downhill and rolled on to the finish. We finally caught Garth as we were entering the park. A few attacks down the final strait and I ended up rolling in 28th. Farmer came across about a minute later in 40th.


Dan Jansen finished up a bit after on his fully loaded Salsa Fargo that he road an extra 38 miles on before the race, so he could get an even 100 for the day. Yeah, sounds crazy to me too, but not as crazy as riding the 300 or so miles around Iowa. Good training day for Super Dan.


Steve flew into town to race and turned around and flew out. Work has been keeping him from the bike, but he put in a solid effort, and is looking forward to more saddle time coming up.


We drank a few recovery beers and hung out for a bit after. Decent start to the year. Lots more racing ahead with the start of the mountain season coming towards the end of April. See you all there!