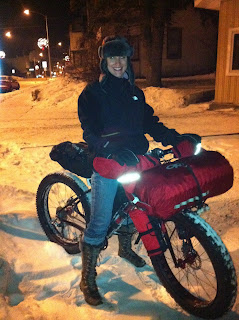 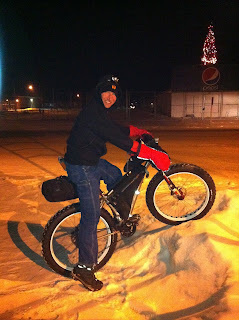 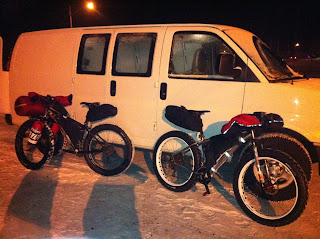 The Tuscobia Winter Ultramarathon is a race for runners, bikers, and skiers. There are three distance options a racer can choose from: 50 K, 75 miles, or 150 miles. The race course consists of an unpaved, mostly flat rail trail which is used by snowmobiles and ATV’s. We opted for the 75 mile bike race which began in Rice Lake and finished in Park Falls, WI.

We arrived in Park Falls around 3ish and decided we had just enough time to check into our hotel and pre ride down the finish of the course. We got in about a 1hr spin which allowed us to double check our gear and hydration set up on the bike and make tire pressure adjustments.

Once we were satisfied with our gear situation, we found our way to the back of the Chequamanon Canoe Club (CCC) for the mandatory gear check. Then we huddled into the very “cozy” CCC ...which was a bar...with all of the other racers (except the 150 mile racers as they had already started) to listen to race promoter, Helen, provide us with vital information about checkpoints, race markers, and course conditions. Chili, pasta and various desserts were also provided and very welcomed after our long drive.

Race day morning began in a chilly 16° F as we loaded our bikes onto a trailer and then loaded our bodies into a school bus to be shuttled to the race start. I can’t tell you how long the bus ride was, but it felt really long, especially if you are Dan and just drank a quart of water.

Once we arrived at the start and unloaded our bikes, we had about 15 minutes before the official start. Approximately 20 racers including bikers and a few runners lined up facing the direction of the trail toward Park Falls. Before I knew it Helen was counting down, “Three, two, one, go!” and that was it. No gun shot, no horn, just go! I was somewhat taken aback by the informality of the start so I clamored onto my heavy, fully loaded bike. Our bikes weighed in at roughly 30 lbs., then piled on with 15 lbs. worth of gear not including food and water. On the bikes we carried the required -20° F sleeping bag, bivy sack, insulated sleeping pad, stove to boil water, pot, fuel for the stove, matches, whistle, 64 oz water container, two blinky lights (front and back), headlamp/bike light, 10 sq. inches of reflective material, and the 3200 calorie food source (to be carried and only consumed in an emergency), and of course the non required chunks of Mike Curiaks survival cookie dough (click here for recipe).

I didn’t really have a strategy, I just knew I had a long day ahead of me. About 5 minutes into the race we approached a short steep downhill dip followed by a short steep uphill. Dan was on the front with Ben Doom. As we approached the uphill I was somewhat taken aback as riders jumped off their bike and started to walk. Ahead of me, Dan was still on his bike making it look easy as usual. I sized up the hill and downshifted. To my surprise I was able to pass everyone on the climb and stay on my bike. The only two people ahead of me after cresting the climb were Dan and Ben. I looked back after catching my breath and realized that I had a huge gap. I looked ahead and saw the gap ahead of me growing steadily. I knew they were both in full on race mode at that point and decided to try to keep them in my site as long as I could....that didn’t last very long, but I still aimed to maintain my steady pace.

The start of the course was mostly smooth frozen gravel with spots of ice and packed snow. This lasted for approximately 20 miles. Gradually the snow started getting deeper and crustier which meant the footprints from the previous day’s 150 mile runners also got deeper. The gravel gradually began to have more of those annoying washboard bumps and it became harder and harder to find a good line. At about 1/2 way into the course, the snow was creating a challenge. The choices were to ride in a tire rut that was super slippery and could shoot your front tire in any direction if you weren’t super careful, on top of super bumpy foot tracks, or crusty snow that the heavy bike kept breaking through. Right side, left side, middle...back and forth just to find the most peaceful piece of trail to ride on. I was beginning to wonder if our mechanic, Ted from Ada Bike Shop, could find a way to get a front suspension fork on my bike. I didn’t feel much leg fatigue, but mostly mental fatigue from navigating across the rough terrain. At one point it took all I had just to stay on my bike. I shifted into granny gear and just told myself to keep moving. I later found out that I wasn’t the only one to make that decision. Dan also found the same section daunting, yet advantageous at the same time. Up to this point he and Ben were battling it out. Ben’s tree trunk thighs were making Dan nervous and incredibly motivated to stay on the bike. As Ben was breaking through the crusty layer of ice, Dan was spinning in his granny gear staying on top to finally get a break (after multiple attempts) that eventually stuck.

The only antidote for my mental fatigue was reaching the second check point. I pulled in to the parking lot of the cabin with much relief. I walked in, grabbed a few peanut butter filled pretzels, gave my name and number, and decided I was good to go.

I realized that I started needing to take a few short stretch breaks every 1/2 hour to chase away the fatigue in my back and arms. This also helped break up the time and give me something to look forward to.

About ten miles from the finish, the snow started to get harder and the bike was staying on top of the snow much more consistently. I knew all I had to do was finish, and I was pretty certain I was in a good position. I was also pretty certain that Dan was in a good position. Suddenly I heard my husband ring tone in my ears. I soon got an update that Dan was sitting at the bar drinking a beer, eating good soup, and staring at his first place trophy which was a slab of maple tree. Our conversation quickly ended and my motivation from that point on was beer and soup.

I began to see the light of Park Falls in the distance and the road crossings became more frequent. I had it in the bag. I entered the town and followed the markers to the finish at the back of the bar with a finishing time of 8 hrs 10 minutes. Ahh, at last. Dan had even pulled my clean dry clothes out of the van and had them waiting for me with a bowl of soup.

The next thing I knew the race promoter, Bill, was handing me small piece of maple tree. “Congratulations. You are unofficially awesome.” It took me a minute to register what he was saying. Then I remembered that I had totally blown past the first checkpoint, which is a big no no. I was concentrating so hard on the trail that my tunnel vision missed the hotel checkpoint in Birchwood. So that made me the unofficial third place overall finisher of the 75mile race, and the first female finisher in the race history....but technically it didn’t count. Talk about bitter sweet.

On the sweet side of things, Dan got a first place finish and was very pleased with his effort. It was definitely a battle for him, no cake walk, a well earned first place finish. Not to mention, he set a new course record by almost an hour on a course that was harder and longer than the previous course record. Sweet.

Next up, our local team sponsored Farmer’s Fat Bike Race.

Thanks for reading now go ride your bike!