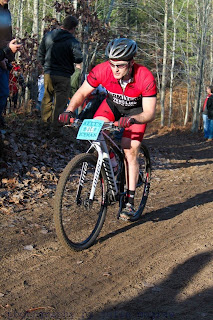 The preparation for the Iceman starts pretty early in the year, even though the race is in November. Making sure you have your USAC license renewed before registration, getting registered with the other 4000 racers trying to access the online registration at the same time, making sure you have somewhere to stay, etc. Then you forget about that for a few months and get on with the rest of the season. When October comes around, you start thinking about it again and evaluating where your fitness is. Mine has been greatly lacking for quite a while due mostly to work, and the last couple years I had actually sold my entry rather than race while out of shape. This year I decided that I’d race anyway.
In the weeks leading up to the race it seemed like I had to have my bike in the shop every other day. Had my brakes replaced under warranty and I had broken a shifter cable (my fault). A big thanks to Ted Bentley at Ada Bike shop for getting it ready and rolling perfectly for the race. I’m pretty sure I had the perfect bike for the Iceman with my Niner Air 9 Carbon (with the Niner Carbon Fork), Stans Notubes Wheels (and sealant), and Kenda Karma tires.

On Friday I rolled up to Traverse City with teammate Scott Chambers and his wife Danielle Musto (Recently crowned 24hr Single Speed National Champion). When we got up there we pre-rode the last few miles of the course to see what the changes were and loosen up the legs a bit. Having ridden most of the course with Shawn D a week earlier, we knew this year’s course would be a bit longer than in the past but also as fast as ever. Pre-riding the course is pretty important for the iceman given that it’s one of the few mountain bike races where tactics are a big factor; the course is too fast for someone to just ride off alone from the start. After the Pre-ride, we went to the big expo to get our race packets and catch up with many of the other racers, etc that you only get to see a couple times a year. Then we got checked in to the hotel and went in to TC for some dinner, which is always fun during the iceman weekend when there are an extra 10,000 or more people in town.

Saturday started off with nice morning weather was nice and sunny, though a bit cold for all of the racers who took off then. One of the perks of racing in the pro class is that you get to sleep in a bit and have a bit warmer race weather. I got a ride to the finish with Scott, to watch some of the finish from the morning racers. Danielle raced the SS class (and won), and it was fun to watch the finish for a bunch of friends (and family too). After watching the finish for a while I headed over to the start with Shawn to get ready for our race. It was pretty cool warming up and seeing all the guys I’d be racing with. With $5000 going to the winner, a lot of top level pros both nationally and internationally show up for the race now, a lot of racers that you’re used to seeing racing world cup races, etc. That can be a bit unnerving if you think about it too much, but it's fun to be a part of. 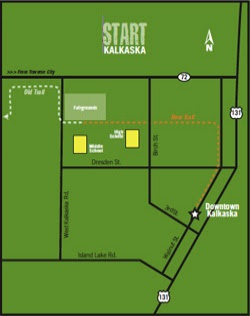 The start of the Iceman now is precarious at best, and can be dangerous. There were about 120 guys lined up for the start of the pro race and with the first mile or so on pavement it was barely controlled chaos. The first turn had a bunch of us rolling through someone’s yard, someone smoked a mailbox and when the course narrowed down the first time from the pavement to dirt two-track there was a big traffic jam and I had both wheels locked up and sliding to avoid hitting the crowd in front of me. Luckily I didn’t get hurt or hit myself, though there were a few guys whose race ended in the first few moments of the race.

The first part of the race has very few hills and for the most part is fast two-track, so my goal there was just to keep a good pace and stay out of trouble. I was able to keep that up pretty well until around the midpoint of the course when I got gapped off the group I was riding with on a couple of hills, which lead into a couple miles of dirt road that were really fast, big mistake there. Riding that by myself wasted a lot of energy for sure. Shortly after that I looked back to see the front of the Women’s field coming up behind, I made sure I wasn’t in their way and tucked in behind them for a bit. Then it seemed as if they had slowed down a bit so I decided to put in a surge and see if I could stay in front of them until Williamsburg road, I didn’t really have a good reason for doing so but oh well. That move worked for a bit until we hit some good hills and I realized my legs were pretty fried and I had to back off, so instead of staying safe and riding with the group I got dropped recovering from my stupid move. After that point, the course gets a bit hillier and so I just had to try and stay steady to the finish, going fast when I could and not blowing up on the climbs. Only the infamous Anita’s Hill required the granny ring, but I definitely was setting the world on fire with my speed either. I was able to push the pace the last couple K’s knowing the end was near, it always helps ease the pain and give you an extra boost when there are a few thousand spectators lining the course yelling and drinking. I ended up coming in 84th (out of 105 finishers and 120 starters), at 1:51:40, not great but better than I expected given my lack of training and racing this year. Hopefully I’ll be a lot faster next year. Shawn came in mush faster in 40th place at 1:41:34 to cap off a great year of racing. The race was won by one of the Swiss imports from the Trek World Racing squad Lukas Fluckiger in a time of 1:33:05. 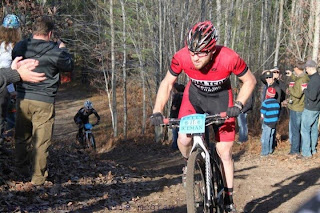 After a few moments of recovery at the finish (and a beer that was waiting for me there), we went and got cleaned up, and a group of us went up to the Jolly Pumpkin for dinner, and into town for a few more beers afterward. One of the best parts of the Iceman is the party that goes on during and after the race, and why not, it’s the last race of the season for most. Thanks to Bell’s Brewery and the Iceman Crew for putting on an awesome event.

I would like to thank all of this year's Farm Team Racing sponsors for the help throughout the year, Versluis Orchards (without which we wouldn’t be the Farm Team), Ada Bike Shop, Kenda Tires, Stans Notubes, Niner Bikes, Soigneur Skin Care, Health Motion, and Marinades Pizza Bistro, for helping to keep all of us rolling throughout the year.

For the full results head to http://results.active.com/pages/page.jsp?eventID=1995593&pubID=3

Lot of Race reports Videos, etc are up on CyclingDirt.com, CyclingNews, etc so be sure to check them out.

Remember… now that the Iceman is done, it’s time for SNOWBIKE SEASON!