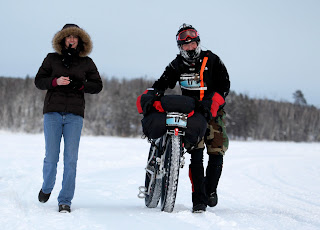 Arrowhead 135 is a human powered ultra endurance event in sub zero temperatures. It is a 135 mile point to point event that follows the arrowhead state trail from International Falls, MN near the Canadian border to Lake Vermillion, MN. Racers are allowed 60 hours to arrive at the finish point, after which time they are swept off the course by rescue snowmobiles. Racers can choose one of three categories which include biking, skiing, or by foot. Regardless of mode, each racer is required to carry with them at all times the following minimal gear list:

I have wanted to do this race for many years and the timing finally seemed right. My approach going into the event was not to be in race mode, but to treat it as a small expedition. I felt confident going into it and made several overnight training rides this winter to practice the skills of cold weather riding and camping. My bike of choice was the Surly Pugsley set up singlespeed weighing in at a featherweight 35 pounds. My gear consisted of the mandatory items plus enough to camp out for up to two nights if needed; although my goal was to finish on day two before dark. Total gear weight without water weighed in at 25 pounds. So between the bike,my gear and me I almost weighed as much as the average NFL pro!

We lined up at 7:00 am Monday morning with about 140 racers, half on bikes,half on foot pulling pulks, and few skiers ready to go with a negative 10 degree F temperature. I rolled out easy keeping it steady in the pace line spinning along in my 32x20 trying to keep my big fat front tire in the bike tracks ahead of me otherwise I’d wash out in the turned up crusty frozen snow packed down by the snowmobiles. It’s a good thing the trail is maintained for snowmobiles as they have 3-4 feet of powder in the woods right now!

The first Check Point of the day was at mile 35 and we were promised a nice warm gas station and encouraged to buy food and water as needed before heading to CP2 which was another 35miles to a Cabin at the half way point where I had a drop bag of food supplies waiting.

It was easy work pedaling behind the leaders who were taking turns breaking trail. On a few hills I did the single speed thing and punched it while others shifted easier which put me off the front a couple times and I briefly had thoughts of switching over to “race” mode but was quickly put back into survival mode as I discovered my freewheel was freezing up almost as fast as my camelbak did only 2 hours down the trail.

After a rerouting of my camelbak tubing through my sleeve and into my glove I was able to solve the frozen water problem by pedaling as hard as I could to generate body heat and thaw the tube. It worked! The freewheel continued to be problematic until the temps warmed up to near 0 degrees. All was well except I had on to many socks which were cutting of the circulation causing cold feet...not good.

By CP1 I had lost contact with the leaders and didn’t really care as I made some clothing adjustments,filled the CamelBak with Gatorade and downed a Mountain Dew before making my way out to CP2. The trail had been mostly flat but what was to come turned out to be like doing repeats up the double at the local Ski Resort in Grand Rapids! I was riding flat pedals with Keen winter boots which turned out to be a good idea as half of my riding turned into walking for most of the middle portion of the race.

At the half way point some 10hrs later I meet up with Tara who was standing out on frozen Elephant Lake nearly freezing while waiting for me and trying to catch some pictures. I give her credit for coming along let alone being outside on the course! She helped me find my way up to the cabin were I resupplied my food and water,downed a freshly made grilled cheese sandwich and headed off into the night starting to think of how far I should go before setting up my bivy site for the night. Somewhere around mile 85 and shortly after inhaling an entire box of mike&ikes I finally stopped to set up for the night. It had been a 13hr day and I was ready to use some of my overnight gear.

You can’t camp on the trail which is fairly packed by the snowmobiles as you would be at risk of being run over by one of them so I walked about 10’ into the woods wading through snow that was easily 4’ deep! I dug out a spot and set up a small tent fast pack style and laid my sleeping bag in the goretex bivy sack inside on top of the thermarest for one cold attempt at a good nights sleep...ya right! I really hadn’t been too cold at any point so far and felt well hydrated and fed. Once inside the bag with temps back down to below zero I ate some more sausage bits, PB@J and HammerNutrition bars. My camelbak was once again frozen and this time there was no hope for it to thaw. I was down to one quart of water in an insulated Nalgene bottle that I kept inside the sleeping bag. The thought of melting snow to drink seemed like too much work at the time, and I decided to conserve my water and hopefully make the 30mile/5 hr morning leg to CP-3 without cramping by going slow.

The camping experience turned out to be more of a hassle than it was worth as my feet became painfully cold through the night despite all my known tricks to warm them up. Sometime around 3am I fired up my stove and used a half quart of water to make up the freeze dried chili-mac. The other half quart was boiled and used as a foot warmer inside the sleeping bag. I don’t even remember how many times I had to pull myself out of the bag to put on my boots and go running up and down the trail to warm up my feet. I bet I did like a million jumping jacks out there. Luckily my upper body and hands stayed within tolerable comfort and I stopped shivering once back in the bag.

At the first crack of daylight I eagerly started the difficult process of repacking all the gear onto the bike and started noticing that everything was way colder than the first day.

I checked my thermometer and it was off the chart reading somewhere around -30! I actually assumed it was broken but later that day found out it had hit -35 degrees F!!! No wonder my feet never warmed up! That sucked!

Once back on the trail from packing up, my hands were absolutely useless and frost bite was setting in fast on my finger tips...not good! I went to start pedaling hoping some effort would warm me up. Trying to ride a 60lb rig with no useable fingers wasn’t working so I resorted to running next to the bike and in between the sunny spots on the trail I would stop to place my hands inside my warmer clothing. This process took over an hour and at one point I seriously considered bailing out on the nearest road to flag down a car to get warmed up. Pedaling probably would have made me warm enough at -30 degrees to eventually warm my hands but once again my freewheel was frozen and I just kept moving forward by foot.

Once I was up and going with fingers working and the bike working, I made a steady pace with out water for nearly 5hrs trying to take it easy on some serious hills. There were incredible views of surrounding frozen lakes and ridge lines covered in the most snow I’ve ever seen. Not even returning to the Blizzard of 2011 aftermath compared to how much of the white stuff they have in Northern Minnesota. Pretty sweet!

So I arrived at the last CP which happened to be a bar with 25miles of flat course left ahead of me. At this point I knew finishing was in the bag as I could warm up and get some much needed water. I hadn’t planned to stay at CP3 long but after my crazy morning and the whole no water thing I treated myself to a bacon cheese burger and some french fries. I must have drank like a gallon of coke! After that I refilled the camelbak and happily headed out for the finish well on track to finish just before dark.

As promised the remaining course was flat. Many had previously remarked that it was boring but I welcomed the ability to just ride and not be continually dismounting and remounting my bike. The finish at Fortune Bay Casino on Lake Vermillion was anti-climatic at best. There was just a big banner and one guy leading you into a room to take your picture and hand you a finishers trophy. 26th place overall was fine by me considering the attrition rate of this race. I was happy to have not only finished on my first try but did so with out feeling too overwhelmed except for the hour of frozen fingers. All 8.5 digits seem to working fine now...

So it took me about 35hrs to do it and the longest I went without stepping inside for a bit was 19hrs. Actual time on bike was about 20hrs. I never had so much fun racing at 4-8mph!

My thoughts right now are that if I do it again I’ll forgo the sleeping in the woods part and just make it to CP3 and chill out there for as long as I need. Its one thing to camp in the woods at below zero let alone -35, but to do it after being outside all day riding, completely soaked,exhausted and then you have to change your clothes outside and keep in mind your nice dry change of clothes have been in a nylon bag hooked to your bike all day while riding in the freezing temps. Ya, that’s painful! Maybe some good training would be to take a long cold shower with the heat turned off in your house,all the windows open and have your clothes waiting for you in the freezer? Then go jump into a snow bank!!! If you actually do this please call me first so I can hang out with you at the next AH135. You would be a natural.

I hope you enjoyed my long story and maybe we can get some Michigan representation for the 2012 ArrowHead 135? I know you want to!

Thanks a bunch to Tara for the support and all the friends and family who showed so much interest that I had no choice but to finish. Thanks to Farm Team and our sponsors for being the best!