Anytime you do a 100 mile race it seems epic once its over. For the Mohican 100 it was epic before it started.

Danielle and I headed down to Ohio on Thursday afternoon with the race being on Saturday. I highly recommend the 1.5 days before the race travel schedule, it is super relaxing. Friday we headed out for a short 1 hour spin and picked the perfect time to end the ride. Right after returning to the hotel the largest hail I have ever seen started pouring out of the sky. 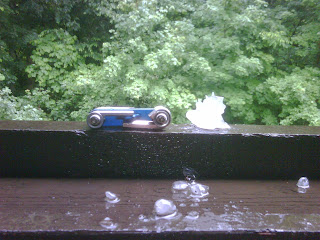 During registration and through out the night it rained and thunder stormed on and off the whole time. I believe weather reports said there was 3 inches of rain.

The start of the Mohican 100 is on paved road and up a large hill to the city limits with a $200 prime for the first person to the city limits. I had an OK start spot and was in good position going into the first section of single track. I heard stories of a stand still farther back in the pack, but I missed that and was into the single track without slowing much. Once on the single track the amount of rain that fell during the day before and night became very apparent. There was a good .5 to full inch of standing water on sections of trail that were not on a hill. All of the down and up hills were super muddy and any sort of direction change was a gamble at speed. Despite the conditions the trails were really awesome. I would love to ride there when the weather is nice and the trails are dry. My legs were good and I was riding around the top 25 into aid station #2. But at this point in time I was becoming super uncomfortable with all of the mud, plus I only planed on being 2.5-ish hours to Aid station #2 at the 34 mile mark. You really had to push pretty hard to get anywhere. The little ring was the name of the game for anything with an incline. With the trail switching from standing water to peanut butter and back for the majority of the distance it turned into 3.5 hours and I was getting low on hydration. I hopped off my bike to grab my drop bag when my legs locked up. REALLY!!!! I didn't feel that bad. I stretched out for a minute, downed some HEED, and took four electrolyte caps. I hopped on my bike and started to ride again. Sort of slower than previously. This was going to turn into a race to just finish with the weather the way it was.

I have sort of forgotten the race between aid station #2 and #3 its a blur and I can't tell you if it was single track or road, but it was 10 miles of misery. Mentally I had checked out and was ready to call it quits. Not even through half of the race at 4.5 hours in, and completely covered in mud the idea of continuing seemed silly. 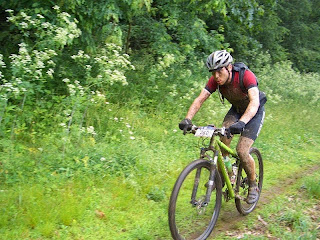 I pulled into aid station #3 with 5 guys, and all of them quit. For some reason I got on my bike to head off to aid station #4. I was getting over the cramping. Stopping at the aid station was a refresher, and I actually started to thinking that I had a shot at a good finish.

Just outside aid station #3 on a climb my shifter broke with all the internal gears stripped out. Dang! from a good finish to DNF.....I turned around and began to walk down the trail back to aid station #3. Spending a good 5 minute walking backwards on the course I got mad at myself for quitting, turned around got on my bike, and started off again. I figured out that I had the bottom 4 cogs on my cassette. That's a lot more than the single speeders had. At this point I was angry and riding pretty hard to just finish. With my gearing the way it was any climb that required standing was out of the question. It was too slimy to stand and sitting and pushing the gears I had was just not reasonable. Walking up almost every hill between aid station #3 and #4 I actually made it to #4. Leaving aid station #4 I got 50 yards and I had a flat front tire, back to my drop bag and a few minutes later I was on my way. About 15 minutes after leaving the aid station it started to rain, and then the wind picked up, and then a siren started to go off. This was all while I was climbing a hill into a farm field. As I was just about to the top the lightening started and it was bad. The rain was coming down so hard it was like standing in a shower. I didn't want to go ride through a farm field with a tornado siren going off and lightening all around, so I sort of chilled out in the road on the edge of the field still in the trees on on either side of the road. A few guys passed me and made the "what are the chances" comments. Well, it may not have happened but it's not like you need to ask for it. I killed a good 10+ minutes waiting out the storm, made it to aid station #5, filled up my water bottles, and took off. After all of the walking and waiting I was felling pretty good. I skipped the last aid station and made up some time on the final single track. Riding into the last "creek" crossing it was more like an adventure race. There were guys on either bank with a rope strung across it, and one guy in the creek. On the way into the water I was instructed very sternly, "enter here", "walk that way", and " put your bike over your head". What?! so a creek that was rideable this morning is now chest deep, crazy.

All in all it was not an enjoyable day and I don't ever want to do a race in that sort of weather again, but I made it finishing 49th in 10 hours 25 mins. I think if the weather would have been nice I would be disappointed with that time. Considering the days events and the fact that I had personally committed to quitting 2-3 times I'm happy I finished, and was in with a respectable time.

The photo below is all silty sand that "filtered" though my socks during the race. I wore out a brand new pair of break pads and the tension pulley on my derailleur is toothless now. 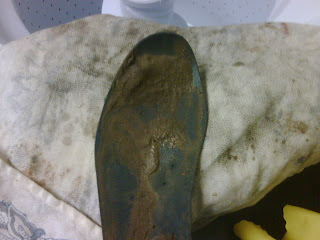